Save Summer’s Sweetness all Winter Long 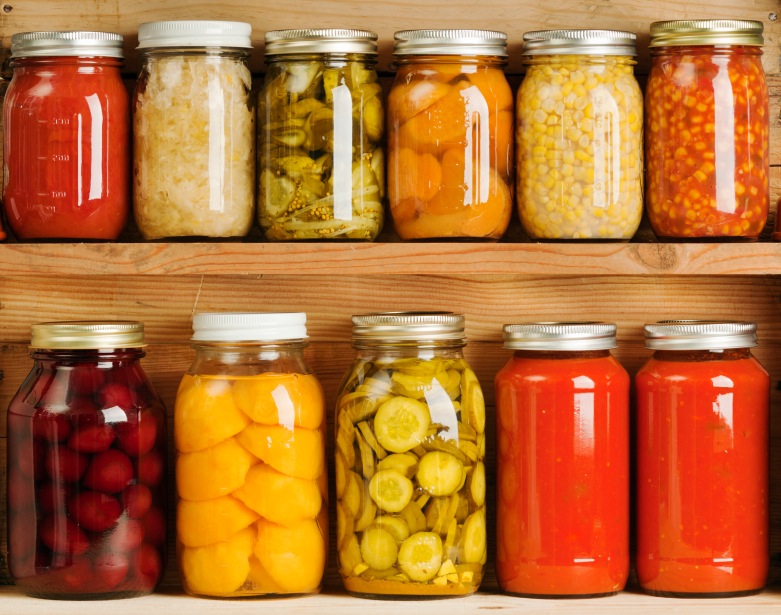 For those of you dedicated to eating more sustainably, storing food is the key to local eating during winter months. It’s also an easy and economical way to bring more delicious flavor and nutrient-rich foods into your diet. Here are a handful of storing options to help you bring this year’s harvest into your cupboards.

Yes you can!
Canning dates back to the early Revolutionary Wars when the notable French newspaper Le Monde, offered a hefty cash award of 12,000 Francs to any inventor who could come up with a cheap and effective method of preserving large amounts of food to help feed the armies. Canning was the winning invention and has been a beloved preservation method ever since. Canning preserves food by first sealing it in airtight containers, and then heating it to a temperature that destroys contaminating microorganisms.

Dry it you’ll like it
Sweet chewy apples, crunchy peach chips, crisp blueberries, green pea poppers and vine ripened sun dried tomatoes. Enjoy the succulent flavors of summer by drying them for the winter. Drying, otherwise known as dehydrating, is an even older method of preservation than canning. The oh-so economical sun and wind have been used for this purpose since ancient times. The modern day version can be done at a low temperature in your oven or in a dehydrator. Removing water from food makes it inhospitable to bacteria and microorganisms that need water to grow. Many different foods are prepared by drying. Plums magically prunes when dehydrated. Another example of a commonly used dried culinary delight is herbs. They keep summertime and winter flavorful.

Feel the freeze
There are few things better in this world than icy cold frozen blueberries. Throw them in your cereal, put them in your muffins or add them to buttermilk pancakes and cook them on the griddle. Freezing food (especially berries) is one of the easiest and most convenient ways of saving summer food for later. It’s also one of the most common preservation methods. Why settle for a freezer burned vegetable medley when you can freshly freeze your own cornucopia? Freezing slows decay by turning water to ice, which makes it unavailable for bacterial growth. It’s fast, easy and keeps food flavorful for many months. This is by far one of the easiest, no muss, no fuss ways to preserve food.

Bring on the bubbles
The oldest form of preservation is fermentation, which precedes human history because fruits ferment naturally. Since prehistoric times humans have enjoyed their fermented brews. The earliest evidence of winemaking dates back to 6000 BC in the former Soviet Republic. The Chinese are considered to be the first to develop fermented vegetables. Imagine a batch of crisp green and red fermented cabbage, salted to perfection accompanying your Thanksgiving diner this year, or a jar of fermented apricot butter patiently waiting each morning to accompany your toast, or even zesty fermented salsa bubbling with attitude on your burrito in December. Fermentation is the chemical conversion of carbohydrates into alcohols or acids. This was a traditional method of preserving foods in times of plenty for later consumption. It is also the preservation method that has brought many of us our favorite foods: wine, beer, bread, cheese, vinegar and various vegetable and dairy ferments. Who would have thought that Velveeta and bud light had such history?

Pickle this
It’s the easiest form of fermentation, and uses either vinegar or brine to produce lactic acid. The distinguishing feature is a pH less than 4.6, which is sufficient to kill most bacteria. Pickling can preserve perishable foods for months. For food that is moist and juicy you simply add salt, and the brine is produced.  For example, sauerkraut is made by salting cabbage and pressing it into a vessel. The water from the cabbage naturally (through osmosis) leaves the cell walls creating its own brine. Unlike the canning process, both pickling and fermenting do not require that the food is completely sterile. The acidity of the solution, the temperature of fermentation, and the exclusion of oxygen determine which microorganisms dominate and determine the flavor of the end product. Eventually, the production of either wine or vinegar occurs. Fermentation also has the added bonus of retaining the enzymes and healthy bacteria present in food, which our digestive system loves.

We hope these preservation techniques inspire you to get local, fresh grown goodies while you can and preserve them for the winter ahead. Happy drying, canning, pickling, freezing and fermenting!